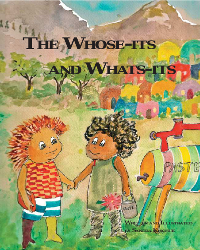 The Whose-its and Whats-its is an imaginative picture book which teaches children to value differences. Colorful, full-page illustrations and rhymes will delight children ages 3 through 10.

The Whose-its wore bright stripes
and polka-dot togs,
And shirts with fat buttons,
and zippers, and frogs,
They mismatched their layers
because that was fun–
If one shirt was plenty,
they wore more than one.

They also spent all day playing.

The Whats-its were serious and lived by a creed,
A Big Book of Rules they all learned to read.
They never made waste and worked all the time–
No music, no dancing, no singing, no rhyme.

No funny fashions, no hats, and no shoes–
They all looked the same with nothing to lose.
No buttons on shirts, they just wore gray smocks
And very long, wrinkled, all same size socks.

Available at www.createspace.com/3743939, on Amazon, and soon, in ebook formats.